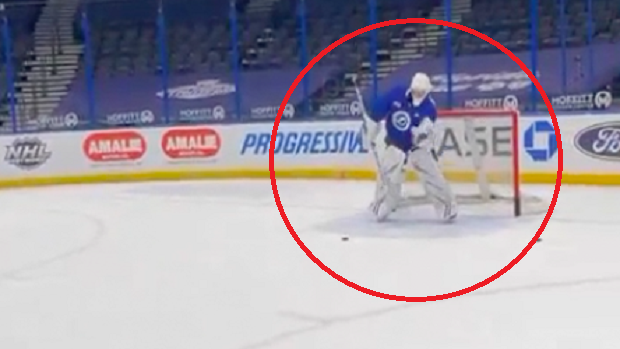 Some things in life make very little sense, but we like them a lot anyways.

Peanut butter and pickle sandwiches, fries and ice cream, chicken and waffles…all very weird, make very little sense, but good combinations. Hockey and football are kind of the same thing for us. Weird combination, but they work!

The Tampa Bay Lightning and Tampa Bay Buccaneers both managed to secure Championship trophies in the same year, which sparked up a great friendship between the players on both teams. So much so, in fact, that it looks like Gronk is trying out for the Lightning?

Okay, not really, but Gronk actually was out at Tampa Bay Lightning practice today, and he actually looks pretty solid between the pipes.

Now in net for the @TBLightning, No. 87, Rob Gronkowski.

Gronk and hockey. Weird combo, but it works! Will his next move be to the NHL? We’d love it see it, honestly.