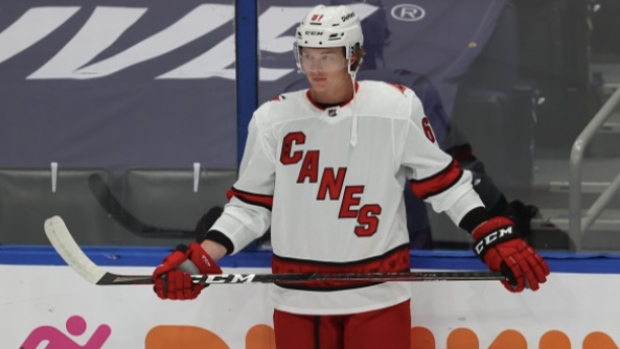 If there’s anything that hockey fans love, it’s when their favourite players aren’t afraid to show a little personality.

Hockey fans have been begging to get a little bit of fun out of hockey players for as long as we can remember, so funny exchanges online or in person are always welcomed in the hockey world.

Morgan Geekie is a Strathclair, MB native, and was drafted 67th overall by the Carolina Hurricanes in 2017’s draft class. Geekie won an AHL Championship with the Charlotte Checkers in his rookie year, and spent most of last season up with the Canes.

As you probably remember from the very memorable way it was announced (Carolina…Panthers?) Geekie was the Seattle Kraken’s selection from the Canes in the Expansion Draft.

Make some noise for @M_14Geekie!

Seattle seems like a team with a lot of personality, so Morgan Geekie already feels like a good fit. Remember when he said this about Pizza Hut?

“At the end of the day, you can’t out pizza the hut” pic.twitter.com/37D7d8JJds

Listen, we don’t fully get this quote, but we know It’s hilarious.

Before he was drafted, Geekie was trying to avoid being stolen from the Canes by trying to pull the old ‘I am 12’ trick.

hello guys I am still 22 my birthday is next week but it is ok I know I am mature for my age https://t.co/wWaoULduhQ

Upon learning he’d been selected by the Kraken, Geekie referenced his love for ‘the Hut’ with this tweet.

Good news, though! There’s plenty of Pizza Huts in Seattle.

Given the training facility is in Northgate, north Seattle into shoreline is gonna be where the deliveries will come from. pic.twitter.com/wKTDFBoTtg