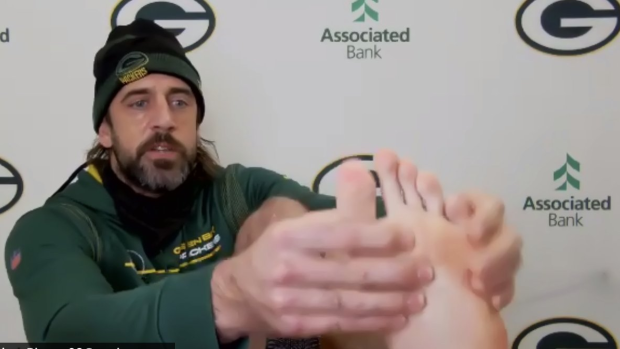 It has been a bizarre season for reigning NFL MVP Aaron Rodgers. Before the season even began, the longtime Green Bay Packers quarterback was in a war with Packers’ brass and was desperately trying to force his way out of town.

In the end, the two sides came to an agreement on a restructured contract, with it widely being speculated that this will be his final year with the team. His matching “The Last Dance” Instagram stories with Davante Adams would also seemingly confirm that a departure at years end was at least part of the plan at some point.

Then, Rodgers season got even MORE dramatic.

Rodgers tested positive for COVID-19, which he had previously stated he was “immunized” against. This, we now know, doesn’t mean he was vaccinated.

THEN THERE WAS THE PAT MCAFEE SHOW!

After facing backlash for the COVID-19 saga, Rodgers joined the Pat McAfee Show to discuss his position with the whole thing. His takes and opinions on the show were strong to say the least, and he didn’t mince words when it came to letting everyone know.

Since then, Rodgers joined the show again where he made a joke about having fully recovered from COVID-19, with the exception of his injured toe. As it turns out, COVID toe is an actual thing, and the Wall Street Journal reported that as being his ailment.

Fast forward to Wednesday, and Rodgers was back in front of the camera speaking his mind. He claimed the reports of having COVID toe were untrue, and to prove it even further he took his socks off and showed off his foot, which didn’t display discolouration – a symptom of COVID toe.

Aaron Rodgers makes it clear he does not have "COVID toe" and says he's dealing with a fractured toe.

Prior to recording, Rodgers actually lifted up his foot to show everyone his toe.

Fracture happened during his quarantine doing his own workouts.pic.twitter.com/KJILzouMeV

He doesn’t plan on missing games.

Rodgers claims that the injury is a fracture, and he seems confident that he won’t be missing any time. While you would think that this would have been his strangest press conference to date, it’s actually just another one on an ever-expanding list of odd moments.