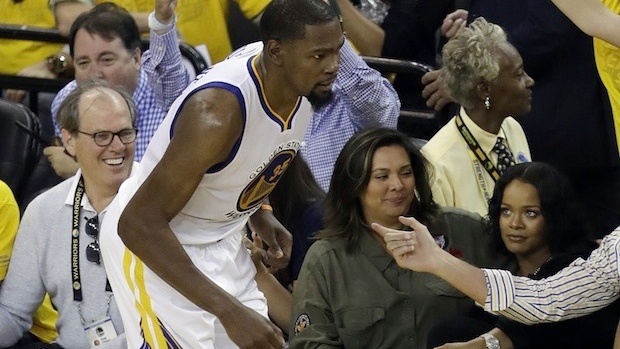 During Game 1 of the NBA Finals it was clear to everyone which player stood out most of all: Kevin Durant. It was clear to LeBron James, who mentioned his initials during post-game, it was clear to the fans at Oracle Arena chanting his name, and it was clear to singer, songwriter Rihanna, who had a courtside view of the impressive performance.

While an extremely high percentage of the near 20,000 fans packed into Oracle were cheering on the Golden State Warriors on Thursday night, Rihanna stayed loyal to her king, and was vocally supportive of LeBron James and the Cleveland Cavaliers. In fact, at one point in the game, the singer got out of her seat and bowed down to King James.

Rihanna bows to The King 👑

But after the game, more people were talking about Rihanna’s trash talk to Kevin Durant than her loyalty to LeBron. In fact, many people believe she yelled “Brick!” at KD as he was shooting free throws. But it appears it may have been the woman sitting next to her.

Durant appeared to think it was Rihanna, staring her down after draining a three, however he dismissed the topic entirely during the post-game podium interviews.