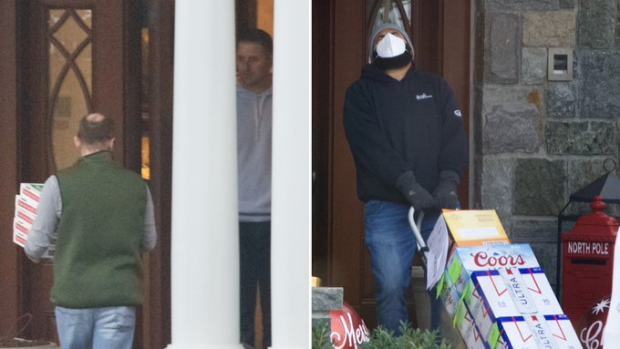 Coaching changes are like breakups in a way. After it is decided that both sides have given each other their full and complete effort and it’s still not working, it’s time to throw in the towel and look for something else. Given that, it’s breakup season in the NFL this week as non-playoff teams sort through their laundry and try to figure something out ahead of next year.

Brian Flores, Mike Nagy, Vic Fangio, Joe Judge, and Mike Zimmer were all casualties of the NFL firing week, joining Urban Meyer who was let go midseason. While everyone handles breakups differently, Joe Judge was pictured coping with the job loss in a very relatable way.

Joe Judge is getting over his New York Giants breakup with beer and pizza -- and a whole hell of a lot of it. https://t.co/U2AkoDzKLC

Very relatable, and we wouldn’t have blamed him if he were the only one eating and drinking it all. That, of course, wasn’t the case.

In fact, the bulky delivery was actually a very classy on the part of Judge. According to New York Daily News's Pat Leonard, it turns out the pizza and beer was ordered to feed his now-former coaching staff and their families as a way of saying thank you.

We could invade someone’s privacy to mock them or appreciate this for what it really is: Joe Judge hosting fired coaches and their families as a thank you, trying to take care of people who dedicated their last two years to him/NYG.

While some coaches undoubtedly turn away from an organization as soon as the hammer has been laid, Judge decided to celebrate his Giants time for what it was. In fact, the way he didn’t mean for this move to become public makes it all the more classy.