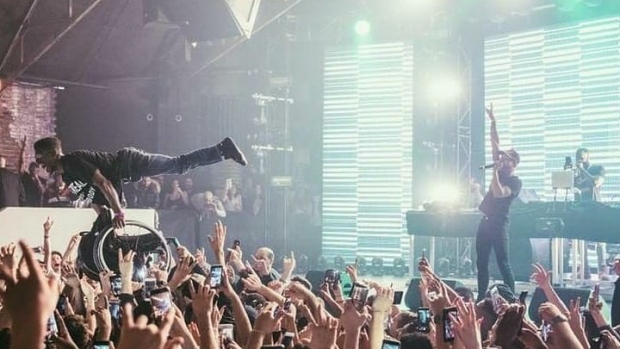 A lot of people see a wheelchair as a weakness, or an unfortunate tragedy. For Woody Belfort, who lives with a form of cerebral palsy, it's just another obstacle in life. An obstacle that he has no problem overcoming.

Belfort - a Canadian that competed with Team Quebec at the Canada Games in Red Deer - won't let his condition interfere with his dream. The high-energy athlete helped Quebec secure a bronze medal by making a clutch shot with less than a minute to go, one that would eventually prove to be the winner in a one-point victory over New Brunswick.

"I don't take many shots, but when I do, I make them count," said Belfort. You can say that again.

His heroics were very well received by those that got to see them, but some viewers may know Woody from somewhere else. He's become an internet sensation for his dedication to bodybuilding, an activity that he brings his wheelchair along with him for.

More about that in a second, but first we need to talk about this epic Tory Lanez story Woody has. It's like something out of a movie.

You can bet Tory Lanez wasn't just appeasing another fan when he said he'd call Woody. Belfort must be the coolest fan that Canadian rapper has ever encountered.

That video is pretty impressive, but even before that Belfort was making waves across the internet. Now up to over 22 thousand followers, Belfort continues to amaze everyone with his perseverance and positive attitude.

48! 48! 48! @menard2636 😂 Crazy how what was once super hard is a lot easier now. So much so, that I feel like I'm posting too many videos of wheelchair handstands 😂👌 All I need to do now is improve the form and I'm good Anyone has a challenge for me, getting kinda bored recently. Copying @pitbullruhl is getting to EASY. _________________________________________ #imbeyondmydisability #handstand #mtl #autumn2018 #calisthenics #bodyweight #calisthenicsmtl #staylitNoriginal #leadtowardsgreatness #progymmontreal #wheelchairhandstand #handstandpractice #gobeyondyourlimits #houstonvsmontreal