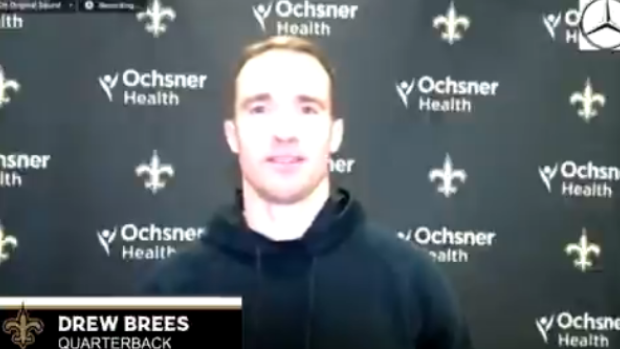 Drew Brees may have just played his last game in the NFL. The legendary New Orleans Saints quarterback is turning 43 next week, and nobody necessarily expects him to follow in the footsteps of 43 year old Tom Brady. If Brees does decide to hang up the cleats, it will be after one of the most successful quarterback careers of all-time.

Ahead of the Saints Divisional Round matchup with the Tampa Bay Buccaneers, FOX NFL Insider Jay Glazer predicted that this would in fact be Brees’ final game in the Super Dome (and presumably the NFL now that he has been eliminated from playoffs). While that was the most concrete indication we’ve had pointing towards Brees retiring, #9 didn’t commit to it when asked in a post-game interview.

Drew Brees DOES NOT announce his retirement postgame. Says he will think about it and then decide. pic.twitter.com/wTPHZJxdF9

While he doesn’t say he’s going to retire, he certainly went through the motions of someone who may be retiring. As the clock ticked down, you could see an emotional Brees talking with backup Jameis Winston. Following the game, Brees and his family went back out onto the field, where they were met by Brady for a special moment.

Tom Brady and Drew Brees catch up after the game ❤️ pic.twitter.com/Ve5e6T39lN

If it was in fact Brees’ last game, there’s not much more to say than congratulations. Not many have ever done it better than #9.