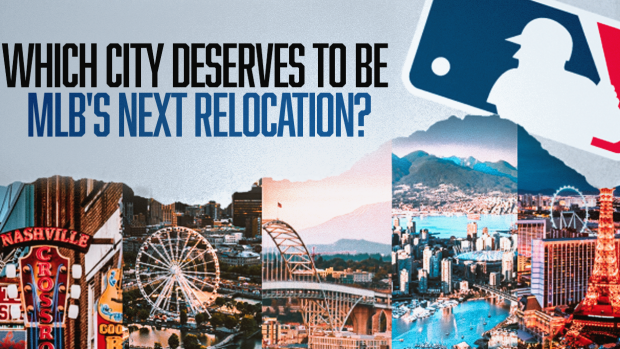 Which city deserves to be MLB's next relocation?

Well, folks, the foot is in the door! The gears are moving on a possible MLB relocation!

It’s been nearly 16 years since the Montreal Expos moved south of the border to Washington to become the Nationals, and with the news earlier today out of the Oakland Athletics, we may see the first MLB relocation in almost two decades.

Per Jeff Passan, the Athletics “will start exploring the possibility of relocating with the blessing of Major League Baseball” as the team’s hopes to move on from the RingCentral Coliseum to a new waterfront location have gone unsuccessful after four years of negotiations with local stakeholders and officials.

Oakland Athletics President Dave Kaval released the following statement expressing how the organization is still holding out on a potential future in Oakland, though will begin to dive into other avenues as MLB doesn’t believe the current stadium will result in future success for the club.

A message to our fans @Athletics pic.twitter.com/xF6TbALbzW

So as the Athletics and league work together on the best plan of action, why not take matters into our own hands and highlight which cities are worth looking at for a possible relocation?

Nashville
When thinking of baseball, thinking of how much the southern United States love the game is almost synonymous. So why not relocate to one of the largest cities in the South, Music City baby! It’s almost strange to think that there’s an NHL team in a southern state but not an MLB team. Of course, we should mention the Nashville Sounds do currently play in Nashville, serving as the Triple-A affiliate of the Milwaukee Brewers, but we truly believe a baseball team has the potential to be explosive in one of the rowdiest cities in the US!

And even better, Justin Timberlake along with others have already begun to petition for a possible team. The Nashville Notes has a pretty nice ring to us!

Montreal
Being lovers of baseball and Canadian, it’s amazing to have the Blue Jays represent our entire nation, but we can’t help but still get a little emotional thinking of the Expos move from Montreal to become the Washington Nationals back in 2005. Think of all those beautiful memories of Andrew Dawson, Gary Carter, Vladimir Guerro, Pedro Martinez, Larry Walker, Tim Raines, we think you get it.

Montreal has a deep-rooted history with baseball. It’s where Jackie Robinson began his major league journey, playing for the Brooklyn Dodgers Triple-A International League affiliate Montreal Royals. If there’s a city that is the most deserving of an MLB team on this list, it’s Montreal.

We’re hoping that if there was to be a team back in Montreal, it would be similar to the Cleveland Browns-Baltimore Ravens scenario, allowing Montreal to continue using the Expos intellectual property.

Vancouver
If you thought we were only going to show love to one Canadian city in this article, then oh boy do we have news for you. If the Toronto Blue Jays visits out to the west coast to play the Seattle Mariners has proven anything, it’s that there are TONS of Canadian baseball fans. Literally, T-Mobile Park gets filled with Jays fans during pretty much every series these two have.

As the short-season Vancouver Canadians are a minor league affiliate to the Blue Jays, we truly think the relocation of a major league team would be successful within the west coast city.

Las Vegas
If the Vegas Golden Knights and Las Vegas Raiders have proven anything, it’s that Vegas is indeed a sports town. Not only were they able to showcase that through an NFL relocation from Oakland but an entirely new NHL expansion franchise. The city is currently home to the Las Vegas Aviators who are a Minor League Affiliate to the Oakland Athletics, but we honestly can see baseball having a promising future in Sin City at the major league level.

Portland
Throughout this list, a major theme is the fact that there needs to be more love in the west for Major League Baseball. If you look at a map of the current MLB franchises, the majority of franchises fall in the east, especially along the east coast. So why not show some more love to the west coast!?

Well, there’s already a major push to get Major League Baseball to look into Portland as a potential home to a franchise, via the Portland Diamond Project. Back in 2019, the movement held a World Series watch party and baseball fans definitely showed up for the occasion, showing off that Field of Dreams mentality, “if you build it they will come.” Rose City has a deep-rooted history with baseball, from the Pacific Coast League to the formation of the Portland Rosebuds of the West Coast Negro Baseball League by Jesse Owens, Portland’s baseball past is rich and definitely worthy of being a possible home to the next MLB franchise.

So there you have it!

Where would you want to see Major League Baseball relocate to next?

Let us know down below!

Where would you want to see the Oakland A's land if they were to relocate? 👀