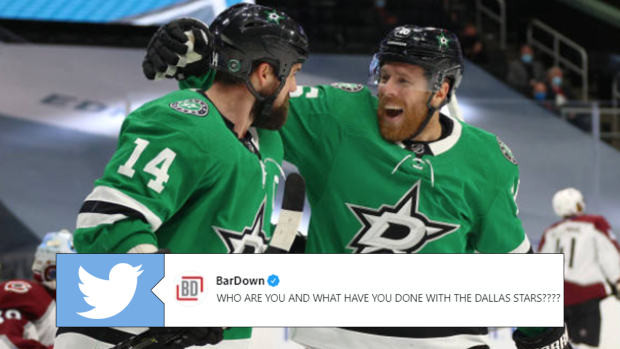 It would probably be fair to say that the Dallas Stars have surprised just about everyone in the hockey world with their play so far in the Stanley Cup Playoffs. While stout defending and grit are enough to keep any team in the running as a contender, the Dallas Stars have just been… well… they haven’t been what they were throughout the regular season.

Coming into the restart, the Stars scored a position in the round robin as the 4th seed in the West. This clearly indicates that they weren’t chumps. Even so, they went 1-2 in the round robin and generally speaking they likely weren’t on the tips of many tongues when asked who could make a charge for Lord Stanley’s mug.

These tweets were sent after the Stars went up 3-0 in half a period against the Colorado Avalanche in Game 4. It should be noted that the Avs are without Philipp Grubauer due to injury, so they are instead rolling with Pavel Francouz.

The Detroit Red Wings (142 goals for) and the Los Angeles Kings (177) were the only teams that scored less than the Dallas Stars in the regular season (178).

...They are now tied for the lead in playoff goals for with the Colorado Avalanche. (42)

As mentioned, facing a goaltender that is not of starting caliber certainly plays a part, and you could argue that their 1st round series against the Calgary Flames also contained questions in the crease. Still, do go from 3rd last in the league in goals for to the playoff leader is no small jump.

But that’s not all that’s different about the Stars…

The Stars also finished the season with the 2nd least goals against, and currently have the most playoff goals against.

WHO ARE YOU AND WHAT HAVE YOU DONE WITH THE DALLAS STARS????

Saying that, they haven’t completely lost their way. While we don’t know the outcome of Game 4 at the time of this article, we do know how it began.

The Colorado Avalanche just recorded their first shot on goal. There's 1:34 left in the 1st period. 😳

Many considered the Avs to be Cup favourites heading into Round 2. Many have changed their tune, as well.