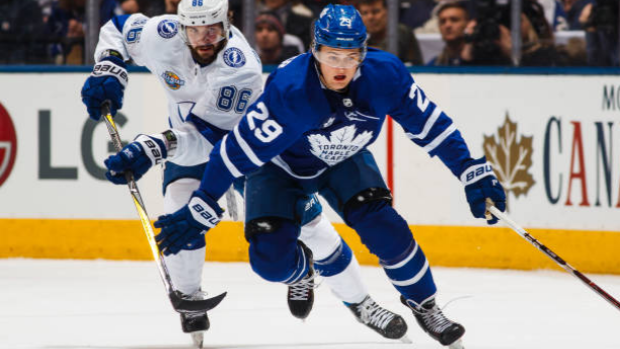 In the final year of his three-year bridge contract he signed on October 11, 2016, Nikita Kucherov remains one of the NHL's best bargains with an average annual value of $4,766,667.

After posting a 65-point and 66-point seasons in his sophomore and third year in the NHL, general manager Steve Yzerman used his leverage and signed the 23-year-old RFA on the eve of the NHL season.

Although the NHL's salary cap was slightly $6.5 million less than it is now at $79.5 million, the production the left winger put up then is somewhat similar to Toronto Maple Leafs forward William Nylander, who remains unsigned with the club after back-to-back 61-point seasons.

Speaking with Joe Smith of The Athletic, Kucherov to full well what Nylander is going through and supports the 22-year-olds decision to hold out.

Nikita Kucherov took a different route, but understands William Nylander’s contract holdout. “Everybody next year will want him on their team.” On players fighting for their value. “You go around the league, look at contracts. It’s not just for him.” https://t.co/SFB8ICzhPJ

“I would have done the same thing,” Kucherov told Smith.

"Everybody has their opinion on him, but as soon as he gets to play, he’s going to prove to everyone — they’ll just be talking about hockey. If he thinks he’s right. Good for him."

If Nylander and his agent eventually come down from their demands, then betting on himself by signing a bridge with a longer-term contract in mind down the right might just work for both sides.

"You go around the league and look at the contracts. It’s not just for him. He’s an unbelievable player. I’m sure he’s going to get paid a lot.”

Nylander must be signed by December 1st in order to play again this season, otherwise, he could become the first player since Mike Peca to miss an entire season (2000/01) over a contract dispute.

“I’m sure at that point everything is dead & the kid will never play for Maple Leafs again."

(h/t Joe Smith of The Athletic)