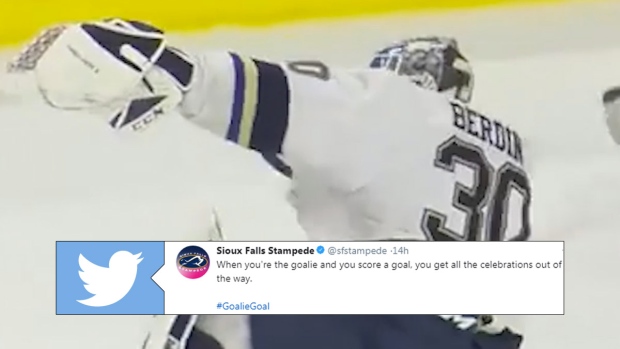 The Muskegon Lumberjacks and the Sioux Falls Stampede went head-to-head in USHL action on Saturday night and it was a game that the Lumberjacks would like to forget about as soon as possible.

After going up 3-0 in the opening frame, the Lumberjacks managed to blow the big lead and ended up losing the game 7-4. To make matters even worse, Stampede goalie Mikhail Berdin recorded one of Sioux Falls’ seven goals on the night.

It's been that kind of night. First @USHL goal for @berdin0101 (Mikhail Berdin) and first in Stampede history. pic.twitter.com/r2LMIK740d

It’s always great to witness a goalie goal, but it’s even better when they pull off a fantastic celebration to go along with it.

When you're the goalie and you score a goal, you get all the celebrations out of the way.#GoalieGoal pic.twitter.com/riZFAAhcd1

The 19-year-old was drafted 157th overall in the 2016 NHL Entry Draft by the Winnipeg Jets and is off to a great start in his second season in the USHL.

#NHLJets prospect Mikhail Berdin made 32 saves AND scored to improve to 6-3-3 for @sfstampede. https://t.co/0pWOnOGESH