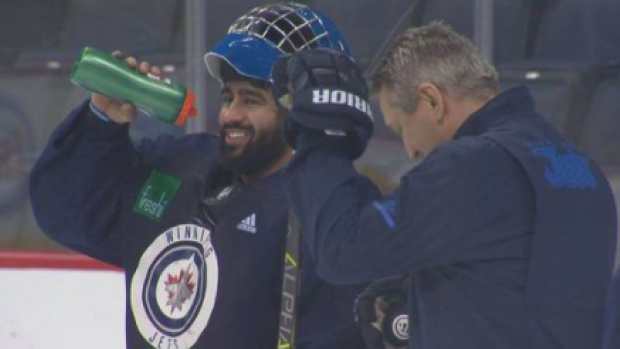 If you grew up playing hockey in Canada, there’s a strong chance that your dream was to one day suit up in the NHL.

But as you grew older, you realized the dedication and hard work it took to get to the next level. At a certain point, most people understand that their dream of making it to the show is unrealistic.

Some may look to broadcasting, sports marketing, or find a job in an arena if they wish to pursue an occupation closely related to the game.

Glen Lafrenais is a member of the Winnipeg Jets security staff and shows up to work everyday at the Bell MTS Centre in the ‘Peg.

On Monday, Lafrenais was informed to take his goalie pads to work, as Connor Hellebuyck was granted a day after travelling back to Winnipeg from Tampa following the NHL All-Star break.

“I like to say I held my own a bit,” Lafrenais told Global Winnipeg’s Mitch Rosset. “I stopped a Patrik Laine one-timer when they were working on the power play. I think there’s some people in the NHL that may have not done that so I can hang my hat on that.”

Lafrenais has played ‘tendy his whole life, and even played a game in the Manitoba Major Junior Hockey League and now plays on a beer league team.

It’s pretty cool for average joe to say he had the chance to go on the ice with NHL players. Even though the shots were a little more harder and accurate than he used to facing, you can bet that Lafrenais has never been so excited to be scored on in his entire life.