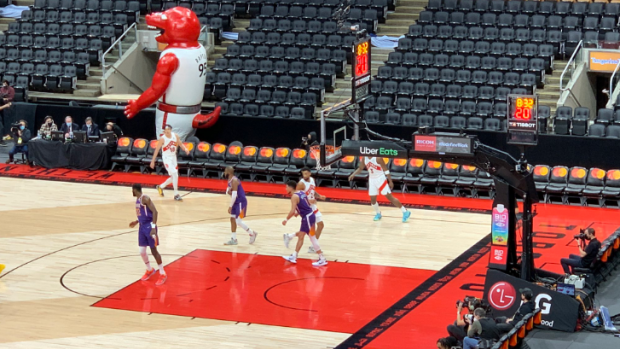 The Toronto Raptors are once again adjusting to playing home games with no fans in attendance. With COVID-19 precautions effectively eliminating the Raptors home court advantage, the team decided to use a different tactic to establish a little normalcy.

That is, if you can call a gigantic inflatable Raptor “normal.”

Near the beginning of the 2nd half, a huge Raptor suddenly appeared in Scotiabank Arena. He immediately caught the attention of those in the building, but he also video bombed the broadcast in a hilarious sideline moment.

Just a regular play. Nothing out of the ordinary to see here. 🦖 pic.twitter.com/RVbYFmPP4t

In lieu of screaming fans or thundersticks, Toronto has a giant Raptor. pic.twitter.com/xxVcurRGmr

That’s the kind of mind games the Raps need with no fans around to help them out. Saying that, their other Raptor did his part for getting in the heads of the Phoenix Suns.

Literally the only fan in the building doing his job to perfection.