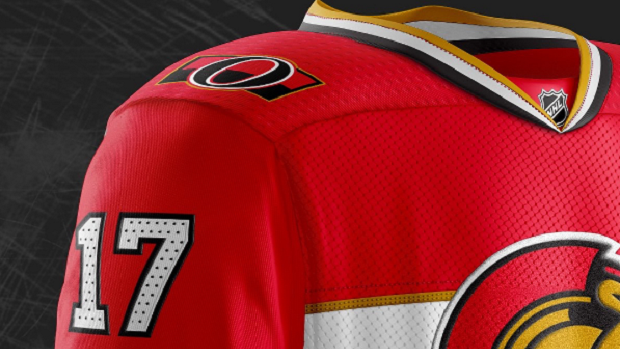 The Ottawa Senators jersey situation is a confusing one.

Last season, it was reported that new Senators president and CEO, Tom Anselmi, was considering a logo change for the team. While there hasn’t been a change, there has been plenty of odd choices that have driven speculation.

In early August, it was discovered that the Senators would use the O (Considered their secondary logo) as the centre ice logo as well as the one the use for branding on most marketing material. Despite this, Anselmi stated last week that the O is still considered the secondary logo.

So, that leaves the door open for a new logo to enter the mix.

With the Senators hesitance to commit to the cartoon senator and their decision to keep the O as their secondary logo, perhaps they would consider keeping the O as an alternate jersey/logo (Whenever they bring those back) and bringing on a new design for the primary logo. Many fans have created concepts that include the 2D Senator from the ‘90s and early ‘00s, but this is one of the best we’ve seen.

Graphic designer Dylan Nowak has created several interesting concept jerseys over the past couple of weeks and he did it again yesterday. This was his concept jersey for the Sens that doesn’t seem that unrealistic taking everything into account.

CLICK THE ARROW ON THE RIGHT TO SCROLL THROUGH

Hi new followers! Shoutout to @tsn_official for another article on my concepts! Today is an Ottawa one. As a lot of my concepts, a mix of old and new. Template as always by the amazing @sportstemplates ! Go check his site for more templates along with this one! Tutorial video out soon too!

The 2D logo was around for the most successful years of the franchise, as the last year they wore it was 2006-07 when the team lost in the finals to Anaheim.

Speaking of Anahiem, if you like that Sens concept jersey check out the Ducks concept Dylan made a couple weeks back.