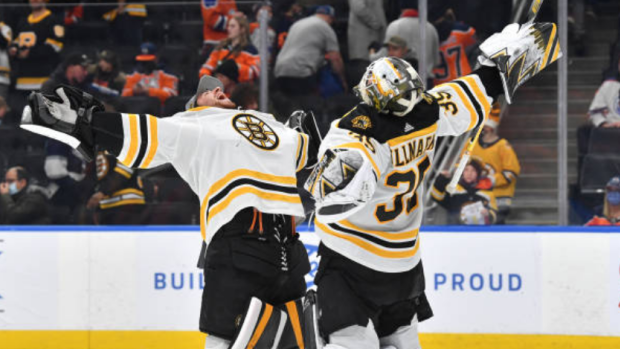 Goaltender relationships are an interesting part of hockey. You want to see your fellow crease protector succeed, but you’re also in direct competition with them for playing time. Sometimes there is a clear starter/backup alignment, while other times there’s more of a committee.

That’s what makes goalie hugs that much more special. When teammates in direct competition with each other genuinely have a lot of love for their counterpart, it’s some real wholesome material.

Of all the goalie relationships, one of our favourites has to be Linus Ullmark and Jeremy Swayman. The two have become known for their over-the-top post-win hugs, a moment that Bruins fans always hang around to cheer on.

The full Jeremy Swayman-Linus Ullmark postgame hug for those who are interested: pic.twitter.com/NAX8fH0U0s

With Tuukka Rask officially back in the mix after returning from injury, that unfortunately meant the end of the “Swaymark” hugs for the time being.

Those that were hoping for Rask to slide into the role seamlessly, well… they may have been a little disappointed with the lack of hug following Wednesday’s win over the Habs.

Ullmark on having Rask in the mix: "It's been great. He's a tremendous goaltender ... a cult figure for the Boston Bruins."

Said it was "bittersweet" to not have his post-win hug with Swayman.

To put Bruins fans even further into their feels, Ullmark actually hugged himself after leaving the ice.

You may think we’re exaggerating the level of disappointment, but we really aren’t.

Linus Ullmark waiting for his hug from Tuukka Rask pic.twitter.com/BYT9tThsPJ

Rask is back but Ullmark and Rask didn’t hug like Swayman would’ve?? pic.twitter.com/qvSsHS5hsX

ullmark didn’t get to hug swayman after his win.. pic.twitter.com/he2yNL8H9l

A little disappointed in the lack of a goalie hug

Rask a loser for not hugging him https://t.co/vAgfynNpCW

Emotional that tuukka didn’t do the hug with Ullmark but also it’s his and sway’s thing. I’m so happy tuukka is back but I just gotta be sad for a second sorry https://t.co/NTKhvUHU1l

Tuukka could use some Linus Hug Tips https://t.co/a9iEKEAPUq

First game without a Swaymark hug and I’m HURT https://t.co/lpfv3GW9NZ