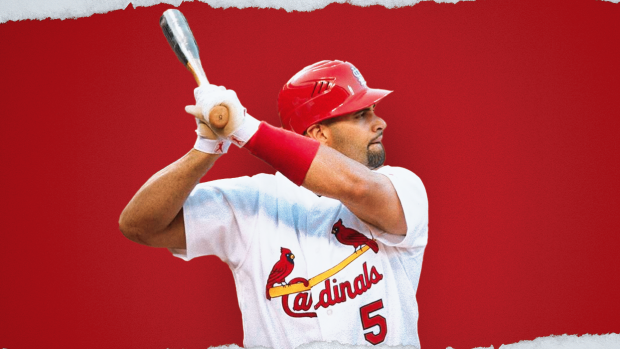 Where will Pujols land?

Just yesterday the baseball world blew up as the Los Angeles Angels designated Albert Pujols for assignment, who was just two months into the final year of his iconic 10-year, $240 million contact.

As the news broke, various new possibilities for Pujols bounced around, with many people thinking that Pujols would team up with his manager of 11 years while with the St. Louis Cardinals, Tony La Russa.

Though unfortunately, that possibility has been shut down as MLB.com’s Scott Merkin first reported that the White Sox would be passing on that opportunity.

La Russa on Pujols/White Sox connection: "We have Jose and Yermin and even if Yermin gets a little less hot, it's a good way to maneuver that DH and get other guys off their feet. There's not a fit here, unfortunately."

So will Pujols end up somewhere else this season? Of course, he’s been on the decline as being 41 years old would tend to do that to you, as he's batted .214/.263/.387 since the beginning of last season.

But we truly wish that Pujols gets to at least have the proper send-off to end his iconic career before being a shoo-in ballot entry into the Hall of Fame.

It’d be amazing to see his career conclude with the same organization that he started with and head back to the Cardinals, even if it’s just a one-day contract!

Mike Trout noted how special it would be if the St. Louis Cardinals would sign Albert Pujols and said their trip to St. Louis two years back was "one of the coolest moments I've been a part of."

"You never know what Albert has up his sleeve."

We’re going to have to agree with Trout here and we’re banking on Pujols heading back to St. Louis.

Other teams that have been mentioned by the baseball community have been Cleveland, Toronto, Oakland, Kansas City, and of course the ultimate option of no one picking him up, but our favourite choice is to have The Machine end up back in St. Louis.