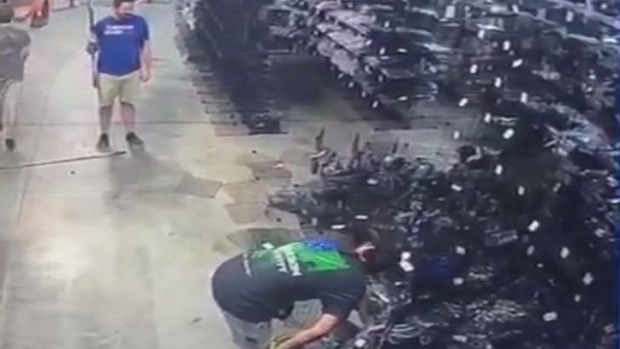 There aren’t a lot of people who are fans of having to work on a Friday night, but sometimes there’s no way around it and you have to find ways to entertain yourself while the rest of your friends are most likely out on the town together.

A few guys who had to work the Friday night shift found some ways to make the night more entertaining by bringing in a hockey net and some sticks. Since they couldn’t exactly leave the building during their shift, they decided to play some puck in the back of the warehouse. What they didn’t think of, though, is what happens if one of the passes or shots gets away from and they found out the hard way.

Well, there goes our stock of quality tweets we’ve been storing in the CH warehouse pic.twitter.com/rPLX1ax3ri

The best part about this video is easily the three different reactions from the three guys. The first guy who bumps the shelves can only stand and watch in disbelief knowing there’s not much he can do to stop a bunch of shelves full of merchandise to come crashing down. The second guy angrily throws off his gloves knowing they just went from leaving early to staying late, while the third guy is just happy he wasn’t the one who knocked everything over and is most likely scheduled to leave first of the three workers.

With that being said, here’s a compilation of people who messed up the one job they had.