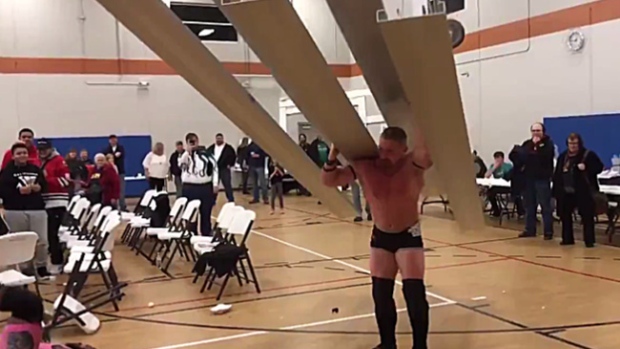 When a hardcore match occurs in the world of wrestling, pretty much anything goes in regards to what potential weapons could be used.

Whether it's a steel chair, garbage bin or lid, tables, ladders or a sledgehammer, wrestlers will grab onto whatever they can to gain a competitive advantage over an opponent.

But have you ever seen a wrestler grab an entire section of bleachers?

Well, on Saturday night in Summit, Illinois -- a suburb of Chicago -- Shane Mercer used one and started unleashing it on his own tag team partners in The Resistance, a hardcore promotion.

Check out the raw strength on that man! Who is capable of lifting a bleacher like that over their head? Shane freaking Mercer.

But he wasn't done there. After smashing their foreheads with the metal stands, he then leaned it up against the ring so he could bounce their heads off it.

I thought it was the coolest thing I've seen at ANY wrestling show. pic.twitter.com/ZrjMtZtnqv

The promotion tagline read: “absolutely NO DQs, NO count-outs and NO b@llsh*t wrestling.”

That was definitely not bulls*** wrestling, that is pure innovation! Long live independent wrestling.