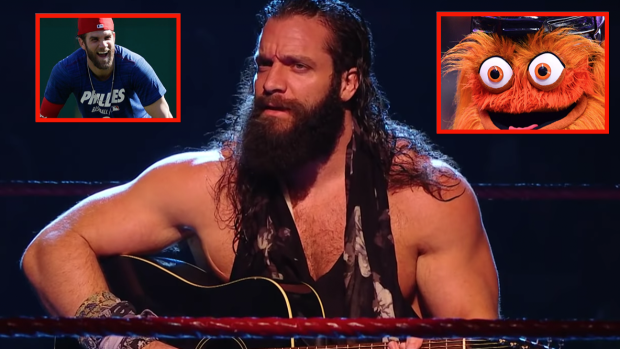 TSN VID
The easiest way for a wrestler to get heat in any city is to make fun of the sports teams in that city.  Monday night, Raw was in Philadelphia and there was no "brotherly love" shown to their sports teams by Elias.
WWE's resident singing superstar and guitar smasher couldn't help but take a shot at the Flyers and even the most popular mascot in sports right now, Gritty.

Elias even took a shot at Bryce Harper to cap off his outstanding performance that fans from Philly clearly didn't enjoy.

Elias might be the best heel in #WWE history https://t.co/4euuqRP9Bz

"You know how I know I'm in Philly? Cause everyone's mom looks like that googly eyed slob Gritty."

"But you really wanna how I know I'm in Philly? Cause Bryce Harper told me this is where his career would go to die"

Elias is a damn legend 😂😂

“You know how I know I’m in Philly? Cause a Stanley Cup is nowhere to be found.” 🎶🎶

It sounds like Elias is walking with @PenguinsJesus by his side.

Gritty responded to the insults on Twitter, as many figured the mascot would.

Say what you want about me, Jeff. But plz, plzzz leave the moms out of it.

Elias versus Gritty at WrestleMania, who says no?