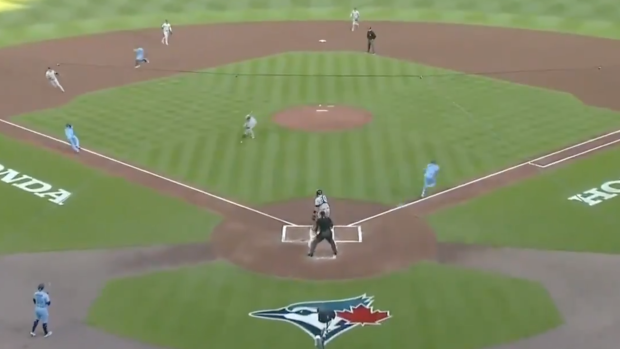 If you’re a Blue Jays fan, then this moment definitely made you wince. Though if you’re a Yankees fan, then you definitely are having yourself quite the day following this 1-3-6-2-5-6 triple play made Thursday evening.

As the Yankees took on the Jays for the final game of their three-game series, some extremely questionable and head-scratching base running lead for the Jays to spoil runners on both second and third.

a visual representation of the yankees’ triple play for those following along at home pic.twitter.com/HULy4W08vz

The @Yankees have turned two triple plays in a season for the first time in their history.

As the AL MVP Candidate Vladimir Guerrero Jr. hit a grounder to Yankees pitcher Michael King, King was then able to turn it over to DJ LeMahieu to get Vlad out at first.

LeMahieu then threw the ball to Gleybor Torres at shortstop who then tossed the ball to catcher Gary Sánchez who further tossed it to third basement Gio Urshela who would ultimately tag Marcus Semien out.

Finally, Urshela tossed the ball back to Torres at short who would then tag out Bo Bichette who was sliding into third during the Semien run down.

What an extremely weird series of events that ultimately would aid the Yankees in their 8-4 win over the Jays.