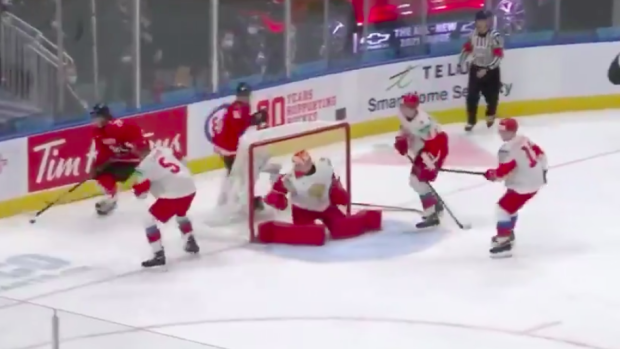 One of the more amusing moments of the World Juniors was when Russian goalie Yaroslav Askarov lost his stick in the middle of play, prompting him to take one of his skaters’ sticks for a brief period.

Well, the internet gave it to Askarov pretty good over that little incident, and now he’s taking some measures to prevent it from happening again, per his Instagram Story.

At least it’s good to see he’s taking it all in good stride! Askarov was joking about super-gluing his stick after the incident, and listen, you just have to respect someone that commits to the bit like this.

We’re sure that Askarov actually would like a do-over of things after Russia's loss to Finland in the bronze medal game, but the 18-year-old remains eligible to play next year. The 11th overall pick by the Sabres in this season’s draft, he was captured on the blueline alone in the aftermath of the bronze medal game in what was a pretty incredible moment.

Yaroslav Askarov stood on the blue line by himself and watched Finland celebrate. #WorldJuniors pic.twitter.com/UsLBOVVW8q