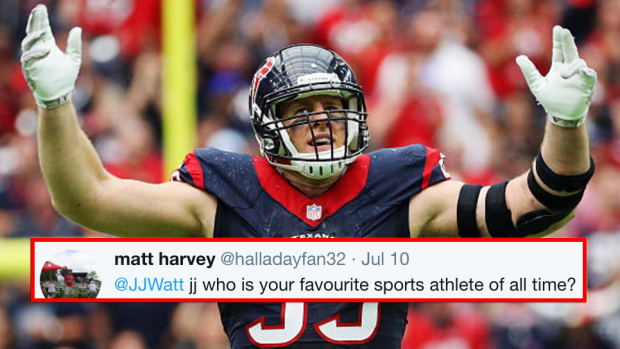 At the age of 28, J.J. Watt is a three-time defensive player of the year, a four-time Pro Bowler and a four-time First Team All-Pro.

When it's all said and done, he'll go down as one of the best players in NFL history, but the interesting thing about Watt is that he has an admiration and appreciation for other sports, specifically hockey.

Not only did Watt play hockey as a kid, but he's showed off his skills against Brian Elliott in recent years and he's actually pretty skilled.

Earlier this week, Watt further proved his love for hockey when a fan asked him who his favourite sports athlete of all-time is on Twitter, to which he gave this answer:

@JJWatt jj who is your favourite sports athlete of all time?

The fact that Mr. Hockey is Watt's favourite athlete of all-time is really cool, especially considering Howe retired before Watt was even born, so he never had the chance to watch him play live.

Aside from watching old clips of him, getting the chance to meet Howe was probably a big reason why he thinks so highly of him.

Growing up as a hockey player, meeting Gordie Howe was one of the coolest moments of my childhood.
He is a legend.
Rest in peace Gordie.

Clearly Watt is a much bigger hockey fan than most people know, and it would be cool to see him in an NHL All-Star Celebrity game in the future because he would tear it up.