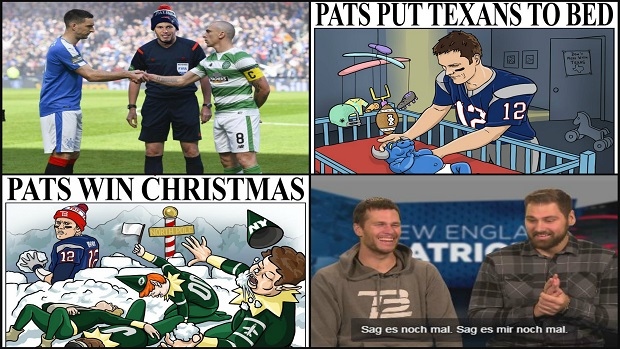 Tom Brady continues to age like a fine wine. The 39-year-old has not shown any signs of slowing down over the past few years, and he’s already come out and said he wants to play until he’s 45-years-old. Whether he was actually serious or not about playing another six years, if there’s one person who can do it at an elite level, it’s Tom Brady.

The 12-time Pro Bowler suffered a brutal knee injury during Week 1 of the 2008 season that forced him to miss the entire campaign. Many people wondered if this would be the turning point on his career, but he’s done nothing but get better ever since the injury.

It turns out that Brady isn’t just a star on the football field, he’s also a star on social media platforms. The Internet really started to grow during Brady’s rookie season, so things like Twitter, Facebook and Instagram weren’t even a thought in anyone’s mind at that time. However, that hasn’t stopped Brady from becoming one of the most popular athletes on social media.

You can take the boy out of California... and I think they took the California out of the boy! Instagram is coming...

Whenever you see him during a game, it’s nothing but business, and rightfully so. But just because he’s all business during the game, it doesn’t mean he doesn’t know how to have a good time away from it.

Since football is a team sport, Brady is all about including his teammates whenever he can, as well.

You guys might not know this, but I consider myself a bit of a loner. I tend to think of myself as a one-man wolf pack. But when the Patriots brought Jimmy in, I knew he was one of my own. And my wolf pack - it grew by one, so where there two - there were two of us in the wolf pack. I was alone first in the pack and then Jimmy joined in later. And nine months ago, when the Patriots introduced me to Jacoby, I thought 'Wait a second, could it be?' And I knew for sure- I just added another guy to my wolf pack. So today, I make a toast! Blood brothers!

As great as his posts may be, the best ones come via his Facebook page, where he likes to share the weekly front cover of the Tom Brady Times.

When you’re the NFL’s all-time wins leader, a four-time Super Bowl champion, three-time Super Bowl MVP and haven’t lost more than 4 games during the regular season in nearly 10 years, you can poke fun at any team you want.