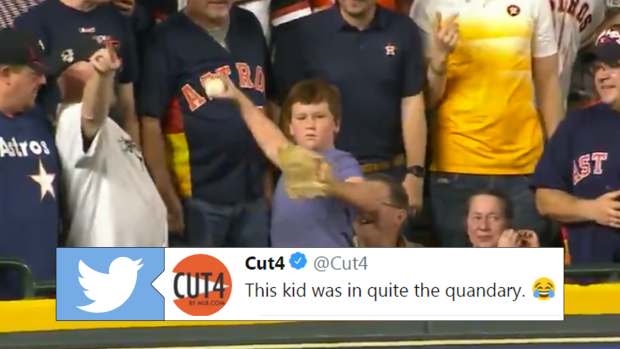 The Boston Red Sox are off to the World Series after defeating the Houston Astros 4-1 on Thursday to take the series by an equal count, 4-1. This was thanks in part to Rafael Devers’ three-run homer in the 6th inning to extend the lead from 1-0 to 4-0. It would end up being the hit that put the game out of reach for the Astros, and you could hear the air get sucked right out of Minute Maid Park.

As you may expect, the ‘Stros fans weren’t happy about the homer and didn’t want anything to do with that stinkin’ ball that counted for three Red Sox runs. Or at least, most of them didn’t.

The fan that ended up with the ball was a young fan that looks to be around 10 years old. At first it looks like he’s just as ready as the rest to throw the ball into left field, but his hesitation shows that actually he kind of wants to keep the ball.

Do you conform and throw it back? Do you say to Hell with the rest and keep it? The kid seems to go through some kind of crisis deciding what to do.

This kid was in quite the quandary. 😂 pic.twitter.com/mSgO1T8dhf

He keeps it! Honestly, that’s kind of relieving. Every kid dreams of catching a baseball at an MLB game, and this guy even brought his glove. Throwing it back onto the field would be throwing that dream away, even if it didn’t come off an Astros bat like he had hoped.

No more talk. Let the kid keep the ball.

DONT GIVE INTO PEER PRESSURE KIDS

That would be me. I would totally keep it. The can boo their lungs out, if they want. Well done, kid!

Kid may never get another HR ball in his life and the beer gutted old guys are telling him to throw it back. Nice. Glad the kid didn’t give in.

Being a kid watching baseball from the stand is a great experience. Catching a homerun ball whether it's from the home team or the opposing team is priceless. Let the kids enjoy the moment.

Gotta keep it. I was yelling at the TV “don’t throw it!”