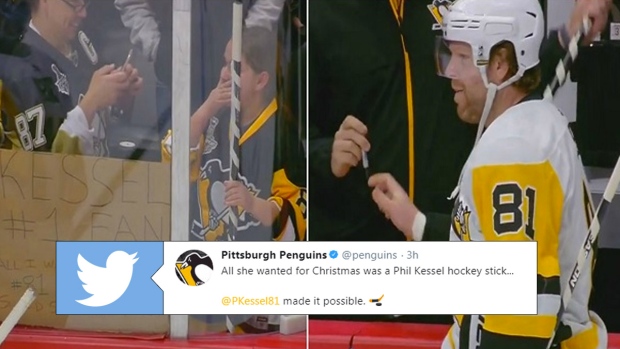 Despite always being the butt of the joke, Pittsburgh Penguins winger Phil Kessel is a fan favourite across the NHL.

Whether you’re a fan of the way he plays on the ice or a fan of his personality away from it, it’s hard to find someone around the hockey community who dislikes the two-time Stanley Cup champion.

Pittsburgh wrapped up its three-game road trip with a game against the Colorado Avalanche on Monday night and the 30-year-old delivered an early Christmas gift to a young Penguins fan who was sitting in the crowd.

A young #Penguins fan was brought to tears after Phil #Kessel made her Christmas wish come true. . . (Via r/hockey)

After noticing that the young fan’s sign was specifically targeted at him, Kessel stopped what he was doing during the team’s pre-game warm-ups and helped make the young fan’s wish come true.

All she wanted for Christmas was a Phil Kessel hockey stick...@PKessel81 made it possible. 🏒 pic.twitter.com/gpaFNvxpn9

The Penguins failed to pick up the victory in Colorado on Monday night, but you can bet that young fan still went home with a smile draped across her face.