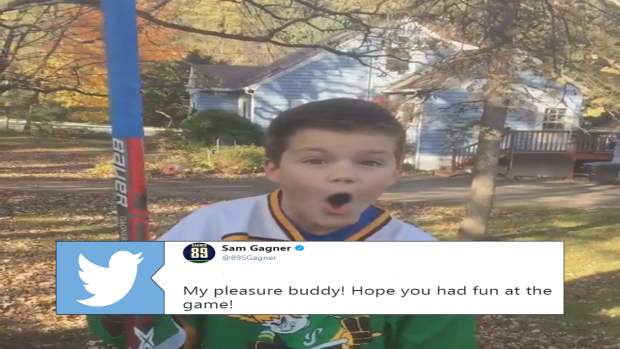 On Tuesday night in Minnesota, we were reminded why sports is sometimes so much more than just game for its ability to make a difference in the lives of those outside the game.

Prior to puck drop between the Wild and Canucks, a young Wild fan stood behind the Canucks bench asking members of the team if he could have a stick as a souvenir. After a few players were asked for their stick, Sam Gagner walked past the young boy only to return Canucks' stick rack and present him with stick that he’ll cherish forever.

He knows only one word and it’s “stick”!

This was my son Jack! What a special night! #Gagnerfanforlife! https://t.co/LcSC7M9YIZ

Without informally thanking Gagner for the new twig because of how much shock he was in from receiving it, the young boy and his father decided to reach out to the Canucks forward on Twitter.

@89SGagner @Canucks @NHLNetwork Thank you Sam Gagner!! Your gift made my boys night and a fan for life! pic.twitter.com/5yUKrG7U41

My pleasure buddy! Hope you had fun at the game!

A classy move all around. This is a prime example of the good side of Twitter and its ability for athletes and fans to connect. Gagner is still goalless in his first season in Vancouver, so maybe he’ll start lighting the lamp now that he’ll be using a new twig.