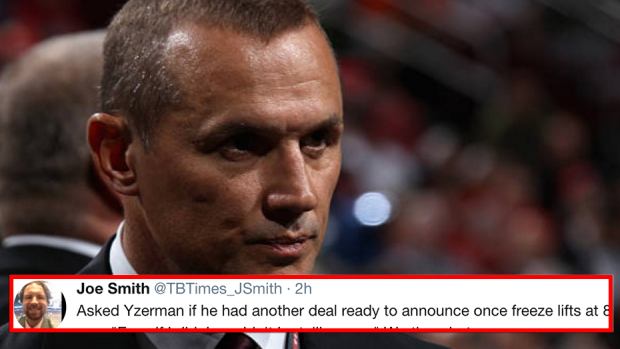 Although the expansion draft has officially come and gone, the fun is just beginning for teams and hockey fans.

The #GoldenKnights have been assembled! Your thoughts on their picks? 🤔

The Golden Knights and the other 30 NHL teams can get back to wheeling and dealing as the trade freeze has officially been lifted.

Thursday and Friday (NHL Draft) figure to be busy and the rumours and trade speculation will only continue to heat up as teams continue to talk to try and get deals done.

As for all these Colin Miller to TOR rumors, driven in part by Dubas/Keefe connection, I'd never say never, BUT it may be more media driven.

During this time, hockey fans should appreciate beat writers and NHL experts even more because there really is no offseason and they're working around the clock to give fans the most accurate information.

Joe Smith of the Tampa Bay Times is one of those excellent beat writers and Thursday morning, he asked Lightning General Manager Steve Yzerman if he had any other deals to announce once the trade freeze lifted.

Yzerman, being the clever veteran that he is, gave Smith a wonderful answer.

Asked Yzerman if he had another deal ready to announce once freeze lifts at 8 a.m. "Even if I did, I wouldn't be telling you." Worth a shot

Like Smith said, it was worth a shot, but Yzerman keeps things close, like the Jonathan Drouin trade that shocked the hockey world last week.

Thoughts on #Drouin to #Montreal?

Smith did give Lighting fans some info on what their GM wants to get done this offseason, though, and if Yzerman can lock up the team's top two RFAs, the

Lightning will have a better chance of making the playoffs again (Tampa missed the postseason for the first time since the 2012-13 season last year).