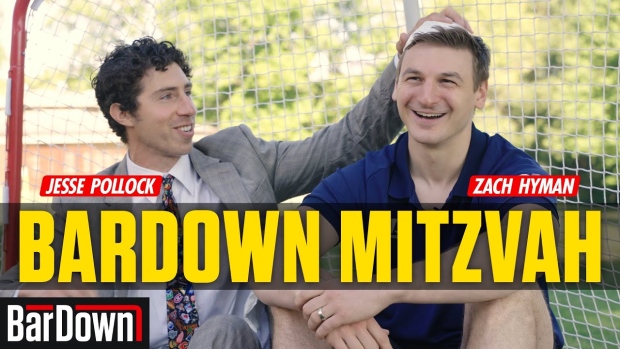 If you’ve been following BarDown for a while, you’ve probably come to know our own Jesse Pollock. A few things about Jesse that everyone and their dog knows: He’s loud, he loves the Winnipeg Jets, and – of course – he’s Jewish.

Jesse touts his faith proudly as he moves through life as a content creator, and he seems to know every single athlete that identifies as Jewish as well. It is not uncommon for Jesse to be pointing out which NHL players are Jewish while puttering around the BarDown office.

One of those players in Toronto-born forward Zach Hyman!

Hyman played six seasons with the Toronto Maple Leafs before moving to the Edmonton Oilers in 2021-22. While changing cities and teams will always come with change, there’s one tradition that Hyman really wanted to keep going; his charity golf tournament.

Each year dating back to 2018 (with a COVID interruption), Hyman helps to organize the Zach Hyman Celebrity Golf Classic to benefit children’s charities, including SickKids hospital in Toronto. The fun event takes place in Toronto, even though Hyman now plays in Edmonton, and is full of familiar faces, raffles, prizes, and golf.

While most of the hockey personalities in attendance at the tournament are friends or former/current teammates of Hyman, we made sure to send Jesse for a little BarDown presence as well.

It’s time for the latest edition of In The Pipes with Pollock!

While it’s impossible to encapsulate the true experience of the video, Hyman – who was definitely feeling at least a little awkward on Jesse’s hockey bag – celebrated his “BarDown Mitzvah”! This involved a kippah, a tallit… well.. unfortunately it did not involve a horah, the Jewish tradition in which a person is celebrated by way of being lifted in a chair while music plays.

Essentially, Matthews is more powerful, McDavid is more speed-based, but both are very, very, very good at playing hockey.

For what it’s worth, this isn’t the first time Jesse has brought his Canadian Tire hockey net along with him to an NHL charity golf tournament.