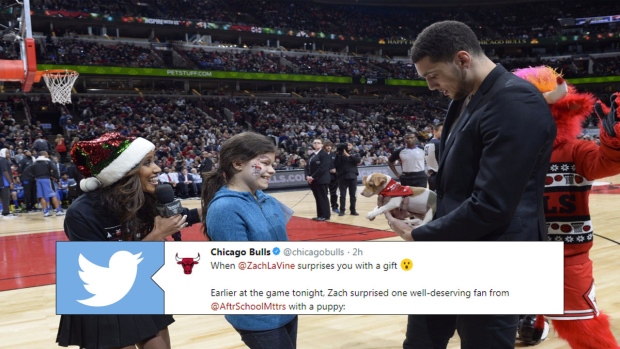 Zach LaVine hasn’t suited up for an NBA game since February 3 of last season and he’s still waiting to make his Chicago Bulls debut, but that hasn’t stopped him from stepping up for the organization from time to time.

During the team’s game against the Orlando Magic on Wednesday night, the two-time NBA Slam Dunk Contest champion surprised a well-deserving Bulls fan with a new puppy ahead of the holidays.

.@ZachLaVine is about to surprise a well-deserving fan from @AftrSchoolMttrs with a gift... stay tuned pic.twitter.com/fiiEkkzJrc

Maria Hogan was at the game as part of the After School Matters program. Since her dog recently passed away, LaVine, the Bulls organization and Pet Stuff USA teamed up to help put a smile on her face for the holiday season.

When @ZachLaVine surprises you with a gift 😮

Earlier at the game tonight, Zach surprised one well-deserving fan from @AftrSchoolMttrs with a puppy: pic.twitter.com/66aHbgLUzw

Not only did Maria go home with a new puppy, she also received a year’s supply of food for her new family member, courtesy of Pet Stuff USA.

As for the Bulls, they remained red-hot as they picked up their seventh straight victory on Wednesday night by outscoring the Magic 112-94.