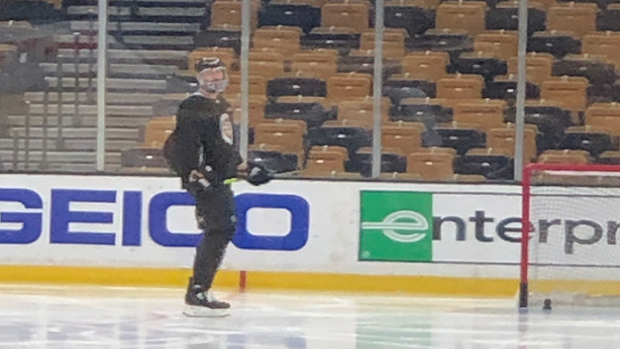 They’re a breed of their own.

At the very core, they’re distinctly different from other athletes because their game takes place - you know -  on a frozen body of water. Even without that, though, hockey players just seem to be wired a little differently.

This is consistently evident when we see players getting quick stitches and wraps on the bench after pretty traumatic injuries, and then bouncing back to play the next shift. This was especially obvious in Game Three of the Stanley Cup Finals, when Bruins captain Zdeno Chara got absolutely leveled in the face by a Brayden Schenn shot, and returned to the game.

It was later revealed that Chara broke his jaw on the play, so obviously, his status was questionable for tonight’s Game Five.

Questionable, that is, if you’re not superhuman Zdeno Chara.

Chara showed up to this mornings' optional skate in a full-contact jersey, with a broken jaw, donning a fish bowl.

Zdeno Chara. On the ice. pic.twitter.com/CrgN2mOeg8

This morning, following the skate, Chara was available to the media - but not in a traditional way.

Because he literally can’t talk right now, Chara wrote his answers to the media.

NHL PR just confirm that Chara can't talk or open his mouth. He will give written answers to few questions this afternoon.

Chara states (writes?) that he’s “no different than any player on either team”, but we’d have to disagree.

This guy is next level.

While Chara is still technically a game time decision, he is in the building, and the quotes from his teammates seem to point to the fact that he’ll be in the lineup tonight.

Brad Marchand on Chara skating this morning: “He’s an incredibly tough man. He’s willing to play through anything. .... It’s great to see him out there.”

John Moore’s thoughts when he saw Zdeno Chara getting ready for work today: “It’s something I’ll tell my kids about.”

We love a little grit, and we’re definitely rooting to see Chara in the lineup tonight.

Hopefully this doesn’t happen, though.