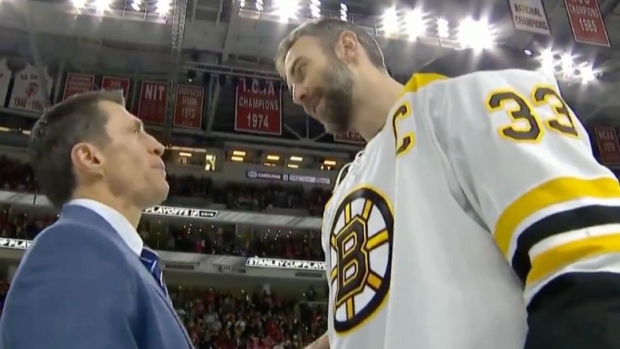 After the Bruins’ Game 4 against the Hurricanes, when teams exchanged handshakes at the end of the series, fans might have noticed an extended exchange between Boston captain Zdeno Chara and Canes coach Rod Brind’Amour.

In a post to his Instagram account, Chara touched on the exchange with some very classy words for Brind’Amour. Isn’t this kind of mutual respect what the playoffs are all about?

After being swept out of the playoffs, it might be easy to clown the Hurricanes at this particular moment, but it’s also worth keeping in mind that they were an underdog that beat the odds to make the Eastern Conference Final under the leadership of Brind’Amour in his first ever season as a NHL head coach. So, not bad at all!

Although he wasn’t available to play during Game 4, Chara watched in full gear from the bench, and took the ice after the game to accept the Prince of Wales Trophy on behalf of the team. Hockey fans absolutely loved the gesture.

What an moment. He missed Game 4, but Zdeno Chara comes out in full uniform to celebrate the Eastern Conference championship with the @NHLBruins. #StanleyCup pic.twitter.com/5J6aVEnkEk