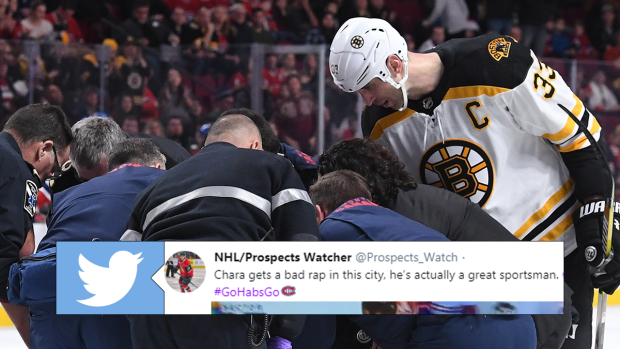 In mid-January, one of the scarier plays in recent hockey history took place when the Canadiens’ Philip Danault was hit in the head by Zdeno Chara’s slap shot.

It was a shot that made no deflections before hitting in him in the head, so everybody was pretty terrified in the moment. In the end, Danault recovered and is back on the ice for the Habs. Over the weekend, the Bruins and Canadiens met for the first time since the incident and Chara made a nice gesture before the game.

It’s simple, but he skated to centre ice and made sure to acknowledge Danault, before giving him the apology tap on the pads.

Chara gets a bad rap in this city, he’s actually a great sportsman. #NHLBruins #GoHabsGo pic.twitter.com/COIV3ixv5x

You know this was on Chara’s mind, because even in that moment, Big Z was clearly very concerned for Danault’s health. While the two teams may be rivals, it’s clear that in moments like these, everyone is on the same side.

Classy move by Zdeno Chara to stay out and make sure Phillip Danault was okay after injuring him with a shot. Most players left ice before Danault was stretchered off pic.twitter.com/u459oT95nN

Danault seemed happy to receive the acknowledgement before the game, and he was definitely appreciative of seeing what Chara did when he went down.

#Habs Danault says he was very appreciative of #Bruins Chara’s gestures in the aftermath of the concussion — staying on the ice to wish Danault well and then texting him afterward.