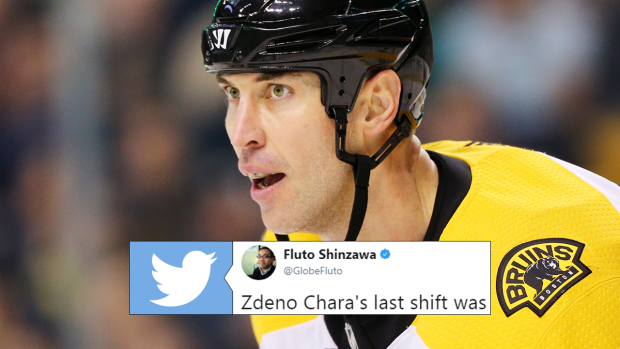 Zdeno Chara is a freak in the most complimentary way we can say.

Obviously he’s large for a hockey player, but his extraordinary work ethic and physique put him in a realm that very few players are in. Every year we talk about how Chara has once again won his team’s pull up challenge – which is ludicrous given his weight and length. Now, we have a more direct hockey example of how his fitness level allows him to succeed in the NHL.

Last night, Chara nearly broke a record for the longest shift in the NHL.

Zdeno Chara's last shift was 4:18. Killed all of Charlie McAvoy's penalty and 1:34 of Brandon Carlo's. Immense.

Four minutes and 18 seconds. He killed two separate penalties in one shift. Penalty killing is some of the most tiring work you can do in hockey, so this was an especially difficult 4:18 as well.

Of course, when we say record breaking, you’re probably curious what the record is.

What’s may not surprise you is that Alexei Kovalev holds the record, but what may surprise you is how he got the record. There isn’t an exact time for shift because it is from 1994 and the league didn’t yet keep official time-on-ice stats, but we have an estimate from this NHL video which lists it as a “five-minute shift”.

The reason for the length of the shift was actually a punishment. Mike Keenan grew tired of Kovalev’s habit of taking long shifts and he decided to force the Russian forward to play out the remainder of the period, turning down several of his attempts to come to the bench.

You can see in the video that the shift was over five minutes (Of game time) but probably less than 5 minutes and 10 seconds (The first time he appears on camera is around 5:03). Just a minute more and Chara could have a place in the record books. Although, we’re sure he’ll have his place for plenty of other reasons.