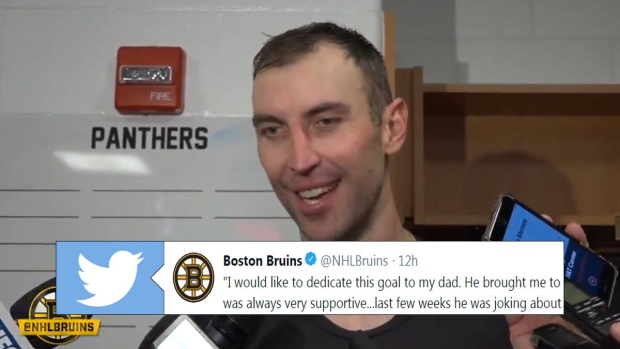 Last night was a pretty special Saturday night for the Boston Bruins, to say the least.

The notorious B’s were in Sunrise, Florida, to face off against the Panthers and managed to take a 7-3 win at the BB&T Center. With the victory, the Bruins officially clinched a playoff berth, but that wasn’t the only thing that made the tilt such a special one.

Ahead of the game, it was announced that defenseman and current longest standing captain in the NHL, Zdeno Chara, signed a one-year, $2 million dollar contract with the Bruins, that will extend his storied hockey career to 22 seasons in the league.

Big Zee on coming back for his 22nd season.#NHLBruins pic.twitter.com/WhuZHyPQjK

Chara’s teammates and coaches were quick to speak to to his character (CHARActer?), and voice their excitement at the news that he’d be back for another season with the team.

.@1996_Carlo on playing with Zdeno Chara: "I've really looked up to him my first three years here. He's given me so much guidance on and off the ice. I've learned so much from him." pic.twitter.com/lhCaZJ11CM

.@CMcAvoy44 on Zdeno Chara: "It’s really hard to put into words. It’s kind of indescribable just how much he’s helped me grow into myself...I don’t take it for granted to be able to play with a guy like that." pic.twitter.com/1ziWgZTOkH

Almost on cue, with all the hype about his new contract, Chara netted his 200th NHL goal during the game, and following the action, paid special tribute to his dad, accrediting him to instilling his love of hockey.

"I would like to dedicate this goal to my dad. He brought me to hockey and he was always very supportive...last few weeks he was joking about when I was gonna score."

It’s pretty rare to see this guy’s soft side, which makes this moment all the more special.

The Bruins will definitely be a force to be reckoned with in the playoffs, which will be fun to watch, and we’re also glad that we’re now guaranteed of getting another year to watch moments like this.

Yeah, Chara is a beauty.