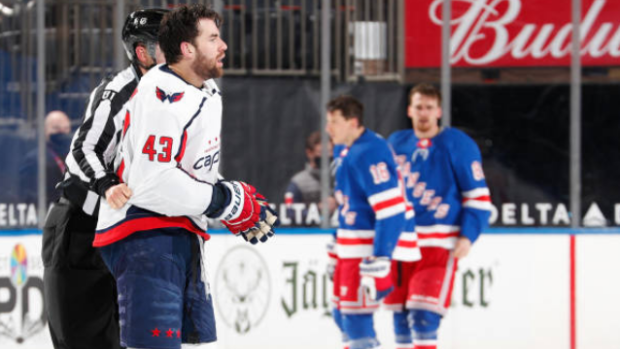 Tom Wilson is more than just a pest, he’s a player that often walks the line between what’s allowed in the game and what’s not. He’s been known to cross that line, too.

Monday’s game against the New York Rangers saw the Washington Capitals tough guy push it too far. Wilson could be seen forcing a vulnerable Pavel Buchnevich’s head into the ice. Other Ranger players quickly jumped in, and melee ensued.

Amidst all the madness, Wilson could be seen ripping helmetless Rangers star Artemi Panarin down to the ice, with Panarin’s head seeming to come dangerously close to major injury. Panarin was forced to leave the game with a lower body injury and didn’t return.

After the game, the Rangers players were really not happy with Wilson.

Quinn on Wilson: Zero respect for the game. Said Panarin is fortunate to be OK.

ZIbanejad on Wilson: "I figured you should have some more respect for the game and for the players. I don't honestly know where to start. It's just there's zero respect. I don't know why I'm surprised, just horrible." #NYR

To add salt to the wound, Tom Wilson scored the empty netter to secure a 6-3 win for the Caps. The Rangers were officially eliminated from the playoffs as a result.