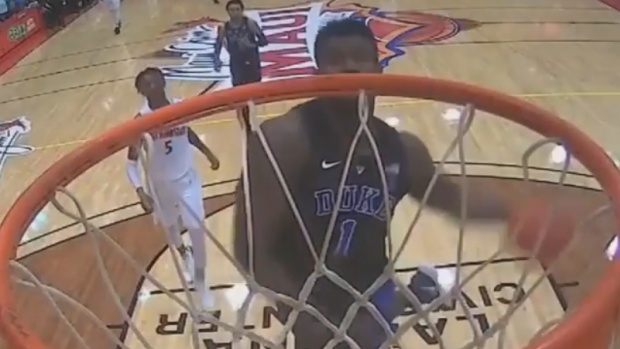 Duke basketball has been a must-watch experience this season, with three of college basketball’s top freshmen starring for the Blue Devils. Canadians, of course, want to see R.J. Barrett emerge as a true hoops star, and Cam Reddish shouldn’t go overlooked either.

But there might not be anyone who has captured our imaginations (or our social feeds) like Zion Williamson has. Every time Duke plays, Zion adds another impossible dunk to the timeline.

Is Zion ever going to get boring? The guy was head-level with the rim, and windmilling against his own momentum (underrated). The jury remains out on how his skill level with translate to the NBA, but athletically, Zion is Julius Peppers if Julius Peppers could run and jump like LeBron James, and that’s a lot of fun.

And, he only gets better in slow motion. This is from an impromptu, post-practice dunk contest between Williamson and Barrett — a dunk contest we can only hope to see in the NBA’s Dunk Contest one day.

There goes that man @ZionW32! He floats.