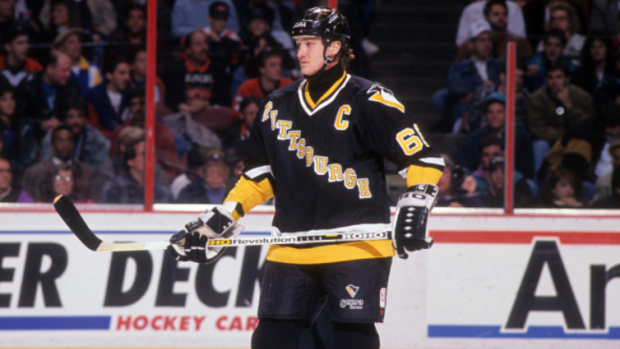 In case you missed it and didn't watch SportsCentre last night or this morning, the Columbus Blue Jackets, yes that team you thought wouldn't be good this season, are one win away from winning their 17th-straight game.

Tuesday night, the Jackets beat the Oilers 3-1, and Thursday they have a chance to get win number 17 in a row on the road against the Capitals.  If they do manage to get the victory, Columbus would tie the 1992-93 Pittsbrugh Penguins for the longest single-season win streak in NHL history.

That being said, the two teams probably couldn't be more different.  For starters, the Penguins were at the height of their NHL supremacy at the time as they had just won back-to-back Stanley Cups ahead of the 1992-93 season.

The Blue Jackets, on the other hand, are trying to establish themselves as a winning franchise after many years of not so great hockey.

At the time, the Penguins had two premiere superstars in Mario Lemieux and Jaromir Jagr, but when you look at the Blue Jackets, they don't have any superstars, just a very talented roster from top to bottom.

Despite the differences, though, come Thursday night these two teams could be beside each other in the record books, so with that in mind, we went back to examine Pittsburgh's 17-game winning streak and came up with 5 Fun Facts about it.  Enjoy!

It's Not How You Start, It's How You Finish

Perhaps the most interesting thing about the Penguins' streak is when it happened.

With 18 games left in the season, the Penguins rattled off 17 straight wins to set the record and capture the President's Trophy.

Before the streak started, Pittsburgh was four points behind Montreal for the top spot in the NHL.

The Penguins actually had a chance to extend their streak to 18 games with a win against the Devils in the last game of the season.

Unfortunately there were still ties back then, and the game ended in a 6-6 tie.  Mario Lemieux did all he could, though, with a team-high three points.

1993 was a tough year for Mario Lemieux.  On January 12th, he announced to the world that he had been diagnosed with Hodgkin's Disease.

Lemieux missed 24 games to undergo treatment, but he would return, and at the start of the 17-game winning streak, he was 12 points behind Pat LaFontaine in the scoring race.

Pat's lead wouldn't last long, though, as Lemieux racked up 51 points over the course of those 17 straight wins.  Lemieux finished the season with 160 points in just 60 games and won the scoring race.

During the streak, the Penguins actually faced the Oilers at Richfield Coliseum in Ohio.

As you could imagine, a lot more Penguins fans showed up to the game than Oilers fans, and Pittsburgh won 6-4.

Richfield Coliseum was the home of the NHL's Cleveland Barons who played there for two seasons.

During the Penguins' streak, another record was tied, but it was by one of their opponents.

The 1992-93 season was the inaugural season for the Ottawa Senators, and it wasn't a good one.

It hit its lowest point on March 30th against the Penguins as they lost 6-4.  It was Ottawa's 37th consecutive road loss of the season, which tied the NHL record, and they would reach 38 road losses in a row shortly after against Hartford.