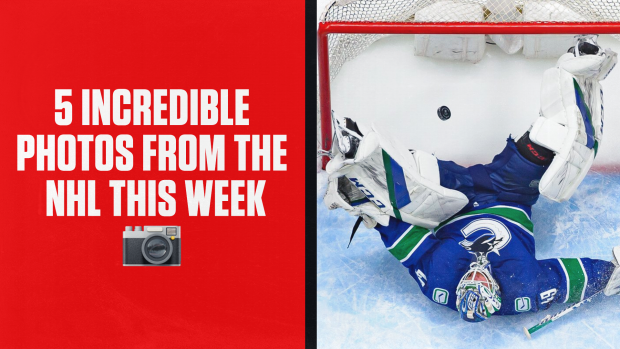 The best photos from the NHL this past week

Busy week in the NHL!

Things are starting to pick up with playoffs around the corner and many milestones were reached as well! Just in case you missed anything, here are our top 5 photos from 4/11/21 - 4/18/21.

Holtby came in CLUTCH in the Canucks 3-2 win on Sunday over the Toronto Maple Leafs. The Buds were up 2-1 with just under 10 min left to go in the third period when Holty made the stop of the week. The Canucks goaltender stopped a Wayne Simmonds deke one way then rolled onto his back to kick the puck in mid air from going into the net. Holtby continued to hold it down for Vancouver to help them make a comeback win!

Welcome to the one thousand club Jordan Staal. The NHL vet played his 1000th career game on Monday April 11 in the Carolina Hurricanes 3-1 loss to the Detroit Red Wings. Staal was honoured before the game with flowers and gifts as well as his family in attendance. His teammates all wore Staal number 11 jerseys in the pre-game warm up in celebration of the huge accomplishment.

Tonight Jordan is playing NHL game 1000!!! What an accomplishment. Congratulations Jordan, Heather, Abigail, Lilah and Henry. We are all so proud❤️ pic.twitter.com/JbS6y5IzK1

Ovechkin Jr is in the building!

The Washington Capitals were approved to reopen Capital One Arena and Alex Ovechkin had a special guest in attendance. Ovi Jr and his mom Nastya were able to attend the Caps game against the Philadelphia Flyers on Tuesday night.

Ovi Jr. was in attendance tonight!

Ovi Sr. made the most of it by scoring a goal in front of his son. 🚨🥰

The Pittsburgh Penguins and Buffalo Sabres had the honour of playing in the NHL's first joint Pride game. The game was to promote diversity and inclusion for the LGBTQ-plus communities, along with celebrating them as well. To show their support, both teams warmed up with rainbow coloured tape, pucks and jerseys to represent the Pride flag.

what an awesome, historic NHL game. hockey is for everyone 🏳️‍🌈 pic.twitter.com/H1LpwueM3t

It’s always a good time when Gritty tries to stir the pot. Former Youtuber star and pro boxer Jake Paul knocked out former MMA world champion Ben Askren on Saturday night. For some reason, now Gritty wants a piece of him! The Flyers mascot took to Twitter to let Jake know that he can also be added to the list of people to fight him.

Let’s just say, we would pay a LOT of money to see this fight.