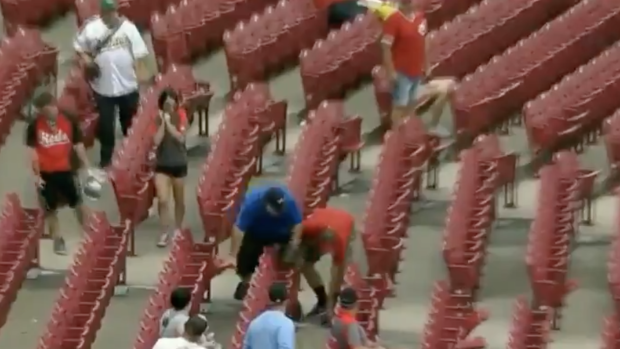 Having fans back in attendance for live sporting events has been a long time coming but it’s super refreshing to see.

Especially when complete anarchy unravels in the stands.

Needless to say, we were left howling after the latest fan battle went down Thursday during the Milwaukee Brewers' visit to Great American Ball Park to take on the Reds.

As a fly ball made its way into the third-base side stands, a Brewers fan and a Reds fan both scrambled over the ball before the Reds fan snatched it from the Brewers fan.

Things get HEATED in Cincinnati pic.twitter.com/g5fhLF1frA

Let us emphasize that the announcers were right and it completely was the Brewers fan’s ball. The guy even had the trapper ready in hand, and we’ll be honest we were kinda rooting for this guy.

So as the bickering went back and forth, another Reds fan came over and just eased the situation by giving the Brewers fan another game ball.

Baseball fans, ya gotta love them!