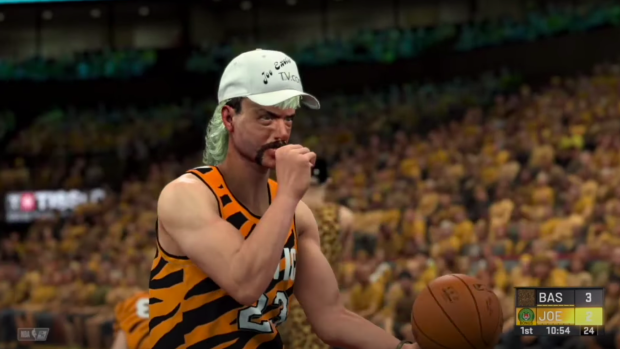 It seems safe to say that fans of Tiger King are conditioned for weirdness, so when we saw that somebody had recreated Joe Exotic versus Carole Baskin in NBA 2K form, we can’t say we were all that surprised.

The digital recreations of the characters? Pretty impressive in their accuracy. Even better, though, is the in-game commentary getting off jokes. (“Carole is usually a killer on defence, but like her husband, she's disappeared tonight!”)

Yes, Shaq is on Joe Exotic’s team. No, we don’t think he’s that thrilled about it. The whole 10-minute video can be viewed here.

After making a surprise appearance in the first episode of the true crime series, Shaq has already cleared the air about his relationship with Joe Exotic... but of course, the NBA on TNT crew was ribbing him for it, too.

The Diesel clears the air on his association with Joe Exotic, and Chuck still wouldn’t stop roasting him on the latest episode of ‘The Steam Room' podcast. pic.twitter.com/cWjW1u6nF2