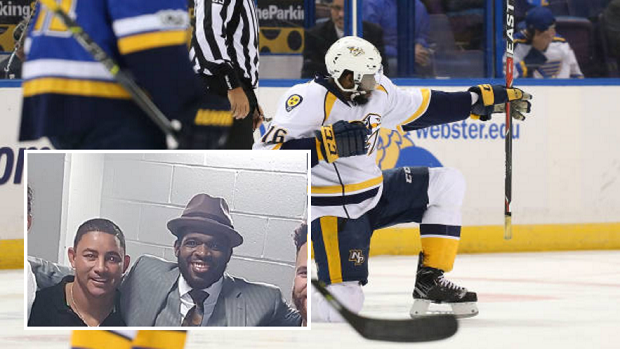 Yesterday, the Blue Jays’ game against the St. Louis Cardinals was postponed due to the weather, so they took advantage of their time off.

An old Canadian friend was in town, putting on a show in St. Louis and several Blue Jays players were in attendance. That friend is PK Subban, who potted a goal and two assists en route to Nashville’s 4-3 win last night against the Blues. Subban and the Jays posed for a photo after the game.

Great having my @bluejays @joeybats19 @russellmartin55 and the rest of the crew come support the boys today! #letsrise @predsnhl #pkapproved

From left to right, the Blue Jays players in the photo are Jose Bautista, Ezekiel Carrera, Russell Martin, Chris Coghlan and Jarrod Saltalamacchia. It’s cool to see that there is still a strong bond between the cross-sport players from their time spent playing in Canada.

Subban is a pretty likeable guy, so it’s no wonder he’s attracting star power from throughout the sporting world.

The #Predators open up the second round with a 4-3 victory over the #Blues.