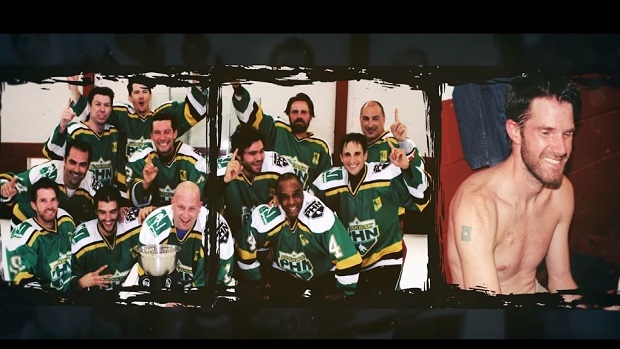 Cancer affects hundreds of thousands of Canadian families on a yearly basis and every person fighting the disease finds a different way to cope with it. For Damian Lastoria, he turned to hockey.

Damian was diagnosed with terminal cancer when he was 32-years-old, but the news didn’t stop him from doing what he loves and that was playing hockey with The Wounded Moose. He continued to play while receiving intense medical treatment, and won scoring titles and championships while doing so. Daim continued to play long after his initial diagnosis, but stopped playing once the pain was too much to bear.

Sadly, Damian passed away at the age of 35, but his memory lives on in his family members, friends, teammates and through ‘A Portrait of Damian’, a documentary about the life of Damian Lastoria and the story of how his love of hockey helped him during his battle.

The documentary was directed by Matt Kelly and includes appearances from Damian’s wife, teammates, coach and friends, as well as the work of Canadian Sharpie artist Danny Granger.

Tonight was a great honour for me. Just to be a little part in this memorial means so much. Damian was loved by many. I didn't even meet the man. But through the stories and meeting his family. I can know that him and I would of been great friends. #sharpieart #toronto #sharpie #blessed

For more information about DO IT 4 DAIM and other charities fighting back against cancer, click here.

Please check out the documentary about the life of Damian Lastoria and how his love of hockey helped him battle through terminal cancer.https://t.co/IBq6cXg7MH