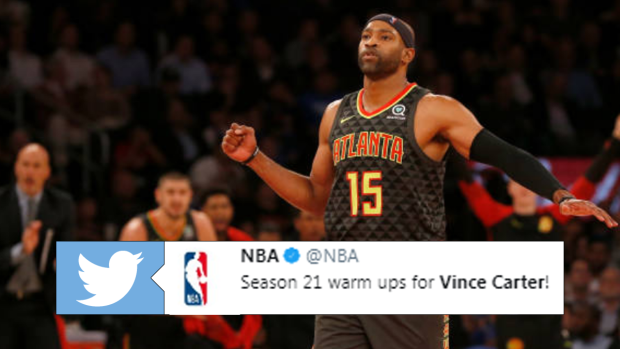 Vince Carter has enjoyed quite the NBA career. In fact, he moves into sole possession of 8th place in games played (1,411) with Monday night’s match vs. the Philadelphia 76ers.

While most players would be soaking a few minutes well mostly filling out a bench role at this point in their careers, VC is still throwing down. We’ve seen some nice in game dunks, but in warmups he shows us that he’s still got some of that windmill magic.

Not bad, let’s see him pull it off in-game though.

It's not too late, @NBA. You can still have @mrvincecarter15 in the Dunk Contest. 😉@lexus #experienceamazing pic.twitter.com/DloZyeElAf

Old man Vince still got it. First guy over 40 to have a chance of competing in the dunk contest?