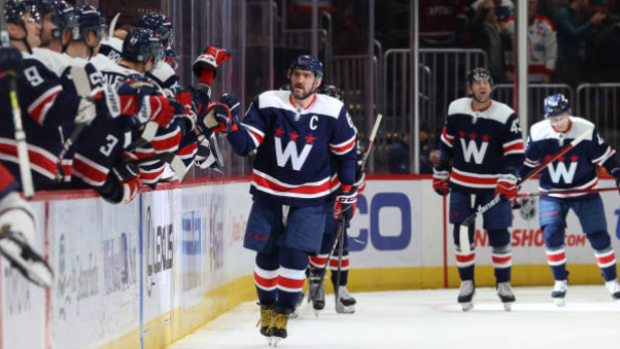 Now 36 years old, Ovi continues to terrorize NHL goalies. His 19 goals on the year are good for 2nd place in the goal scoring race, with only Leon Draisaitl’s 21 goals better.

This season’s scoring race, of course, is secondary to a different one. With Wayne Gretzky’s record of 894 goals getting closer and closer, all eyes are on Ovi as he continues to close the gap. Along the way, Ovi has been surpassing other NHL legends and reaching incredible milestones.

On Saturday, that milestone was 750 career goals. Playing in his 1,222th career game, Ovi became the 2nd fastest to get to the mark behind… well… you know who.

Alex Ovechkin scored his 750th goal and became the second-fastest player in NHL history to reach the mark (1,222 GP), behind only Wayne Gretzky (1,001 GP).#NHLStats: https://t.co/OauF28PJHy pic.twitter.com/pbG0fZJujj

Ovi is the second fastest in NHL history to reach 750 goals! pic.twitter.com/nq4cymEiZn

The fact that Gretzky got to 750 goals 221 games faster than Ovi is pretty ridiculous, but that doesn’t mean his record is safe.