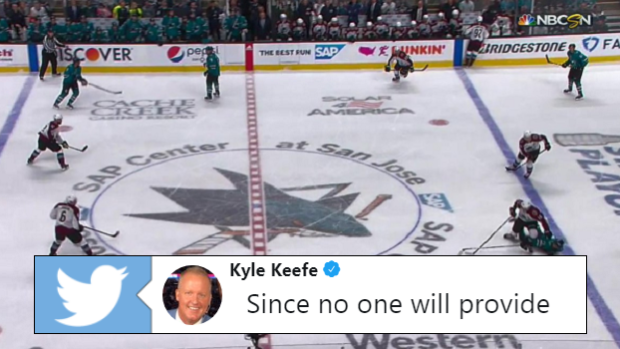 An overhead view of the controversial offside call on Gabriel Landeskog from Game 7. , NBCSN

It’s safe to say there were some unhappy Avalanche fans after a controversial coach’s challenge ultimately went in the Sharks’ favour.

For those of you who missed it, Colin Wilson appeared to tie the game nearly halfway through the second period but after a challenge from Sharks head coach Peter DeBoer, it was determined that Avs captain Gabriel Landeskog was offside by a hair as he was slowly making a change at Colorado’s bench. The ruling had its critics but the most notable rant came from Avalanche studio anchor Kyle Keefe, who went off on Twitter after the goal was overturned. The man was clearly not on the same page as the crew in Toronto.

Show me the look!!!
Show me how that is reversed!!!

Since no one will provide video proof or any legitimate explanation for the call that was reversed....we will show it to you 1,000 times in the @AltitudeTV post game show and you make the call yourself.

Fact is, they can’t prove it.

Again, show me the video that backs up the call reversal.

Not to mention, if that call is not reversed, the Avs would have gotten a power play for a failed challenge....which it clearly was.
Game changing, series changing call. Show me the video that backs up the reversed call

Think Mr. Keefe thought the call should have been upheld, er……

The call certainly did prove to be game-changing. Less than five minutes later, Sharks forward Joonas Donskoi put home the eventual game-winner after beating Philip Grubauer with 7:23 left in the second.

The San Jose #Sharks advance to the Western Conference final after defeating the Colorado Avalanche, 3-2, in Game 7!

Despite the call, Landeskog proved why he was given the ‘C’ at 19 years of age. He completely shouldered the blamed after the game and admitted that he should have gotten off of the ice quicker.

Oh, what could have been.

The Avs can't stop the Sharks in Game 7 #BarDownToonz @bardown