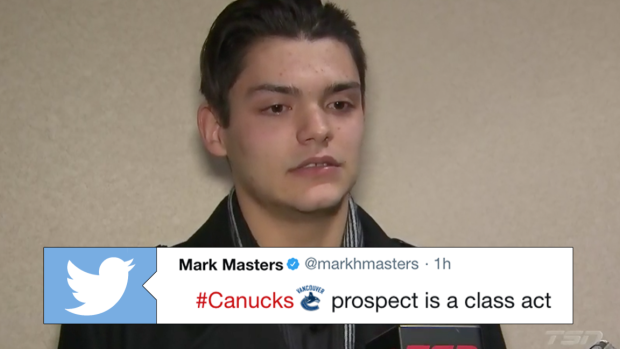 Before camp, Memorial Cup champion goalie Michael DiPietro may have been viewed by some as a lock to make the team, but on Friday night, he got some shocking news as he was the final goalie cut.

Colgate's Colton Point has made the team

DiPietro was understandably emotional after receiving the news, but the 18-year-old handled it as best as he could and had some heartwarming parting words for the team after being cut.

Emotional Michael DiPietro: "Trying to weather the storm. Obviously not something you expected coming into camp, but I respect their decision & I wished them all the best. I told them they're going to win gold ..."#Canucks prospect is a class acthttps://t.co/GcliiYYNqi

That's what hockey is all about right there.  Obviously DiPietro was disappointed with the decision, but he's still going to support his friends on the team as they attempt to win gold.

Plus, this isn't the last chance for DiPietro to represent Canada at the World Juniors as he'll be 19 next year.