After what felt like years since seeing Anaheim’s old Mighty Ducks logo on a purple jersey, the organization said enough’s enough and decided to give hockey fans a blast from the past. The team revealed today they’re new third uniform and the colour pattern, along with the logo, looks strikingly similar to the bad boys that Charlie Conway and Adam Banks wore in the 90’s.

Anaheim has worn alternate jerseys featuring the old logo in the past, but none have been matched to the old colour scheme. It has more commonly been visible on the team’s third shoulder patch on their regular jerseys. 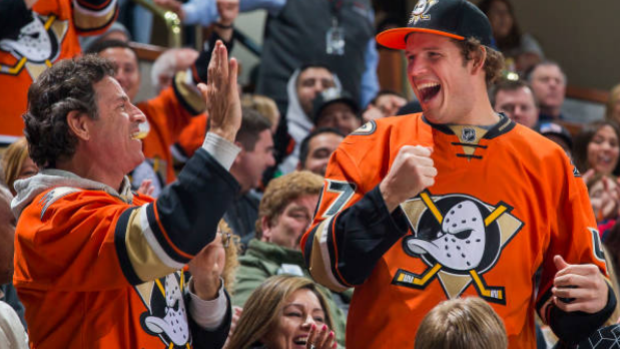 Other graphic artists have given a crack at trying to design a new third jersey for the team that also featured the iconic green. Take Dylan Nowak, who’s design caught quite a bit of buzz on our Instagram feed.

Hockey fans can finally breathe a sigh of relief, because arguably the greatest jersey in NHL history will be on the ice again. We’re just really hoping that Ryan Getzlaf can rally his teammates to do a flying V on opening night.