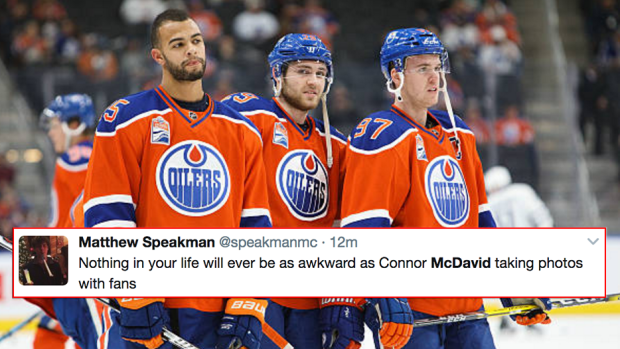 Tuesday night, the hockey world was treated to what might be the greatest photo anyone has ever taken with Connor McDavid up to this point.

Connor #McDavid doesn't seem thrilled to be taking this photo. . (Via: Twitter/Margeaux Maron)

As far as awkward fan photos go, this has to be near the top, if not number one.

McDavid looks extremely uncomfortable, and for good reason, but it's an incredible picture nonetheless.

If you don't think awkward pictures get much better than that, though, you're very wrong.

McDavid took another photo at Edmonton International Airport, but this awkward fan photo features another one of his teammates, Darnell Nurse.

First of all, hats off to Nurse and McDavid for taking pictures with fans, because that's something we love to see from athletes and we imagine the people they took the pictures with will never forget the moment.  Secondly, who's more uncomfortable, McDavid or Nurse, who is getting completely ignored by the way.

Let us know by tweeting us @BarDown, and Nurse fans, don't worry, he was part of a much less awkward photo with Ryan Nugent-Hopkins.

McDavid, Nurse and the Oilers are in Anaheim Wednesday night for Game 7 of their second round series.

Nothing in your life will ever be as awkward as Connor McDavid taking photos with fans pic.twitter.com/3SO9ChC7Xe