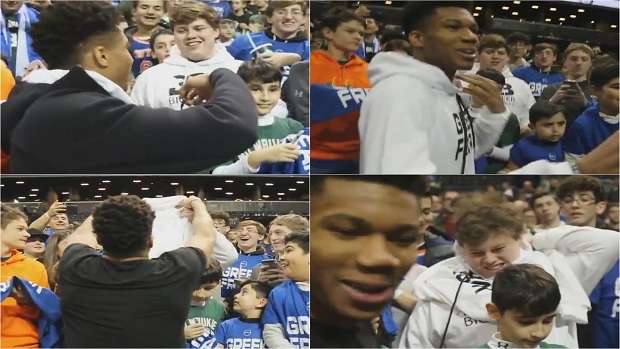 Not many basketball fans knew what type of player the Milwaukee Bucks were adding to their organization when they selected Giannis Antetokounmpo 15th overall in the 2013 NBA Draft because of the path he took to get there.

The Athens, Greece native played one season in the Greek A2 League with Filathlitikos B.C. where he averaged 9.5 points, 5 rebounds, 1.4 assists and 1 block per game in 26 games with the senior club. Since he didn’t take the typical college basketball route to the NBA and he entered the league as a 19-year-old, the Greek Freak spent the first two and a half season in the league adjusting to the different style of play. However, by 2016 he made it clear he was the face of the franchise moving forward.

#GiannisAntetokounmpo became just the fifth player in NBA history to finish the regular season as the team leader in every category. (📷: @sportscenter)

Antetokounmpo earned superstar status last season after he went on to lead his team in five major offensive categories to become just the fifth player in NBA history to do, and he also became the first player in league history to finish in the season in the Top 20 for total points, rebounds, assists, steals and blocks.

The Bucks have never really been known to draw large crowds on the road, but now they have a loyal following at every road game thanks to Antetokounmpo.

Hundreds of Greeks serenade @Giannis_An34 after the game in Cleveland!! pic.twitter.com/slAIvmlXtj

Following the team’s 109-94 victory over the Brooklyn Nets in New York on Sunday afternoon, hundreds of fans stuck around for a chance to meet Antetokounmpo and one young fan ended up having a one-of-a-kind interaction with the two-time NBA All-Star.

After noticing one of the fans in the first row was rocking a Big Baller Brand sweater, Antetokounmpo ended up giving him the young fan the sweater off his back as a way to help him hide the Big Baller Brand logo on his chest.

You can add Antetokounmpo to the ever-growing list of people who are tired of the Big Baller Brand.