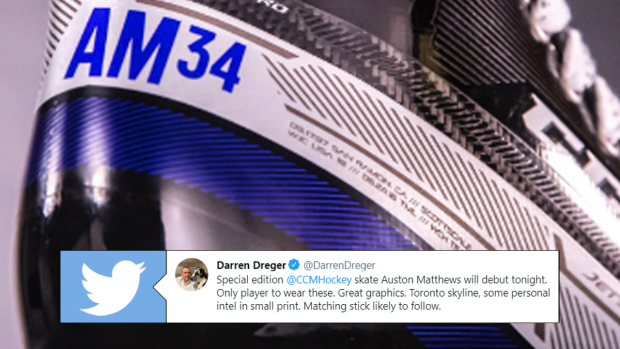 After starting the year with a blistering hot 18 goals in 20 games played, it took Auston Matthews a few games to get back to his scoring ways after returning from a hand/wrist injury. The American sniper found his touch on Tuesday, however, when he put home two tallies against the Winnipeg Jets.

Unfortunately for the Leafs, Matthews’ production didn’t result in a win. The Jets downs the Buds 4-3 in regulation, which effectively spoiled the otherwise good game from "Papi."

Maybe Matthews just needed a few games to get into it, or MAYBE he needed something else. #34 was rocking a pair of custom CCM skates that featured information on Matthews – including his birthday, hometown, former team, and more – along with the iconic skyline of Toronto.

That a pretty slick design, and if Matthews puts any sort of superstition behind these skates we could be seeing a lot more of them. Saying that, he was scoring at a pretty wild pace earlier in the year already, so maybe the fact he’s scoring in these skates is really just a moot point.